Cowboy Cerrone
You Are Viewing 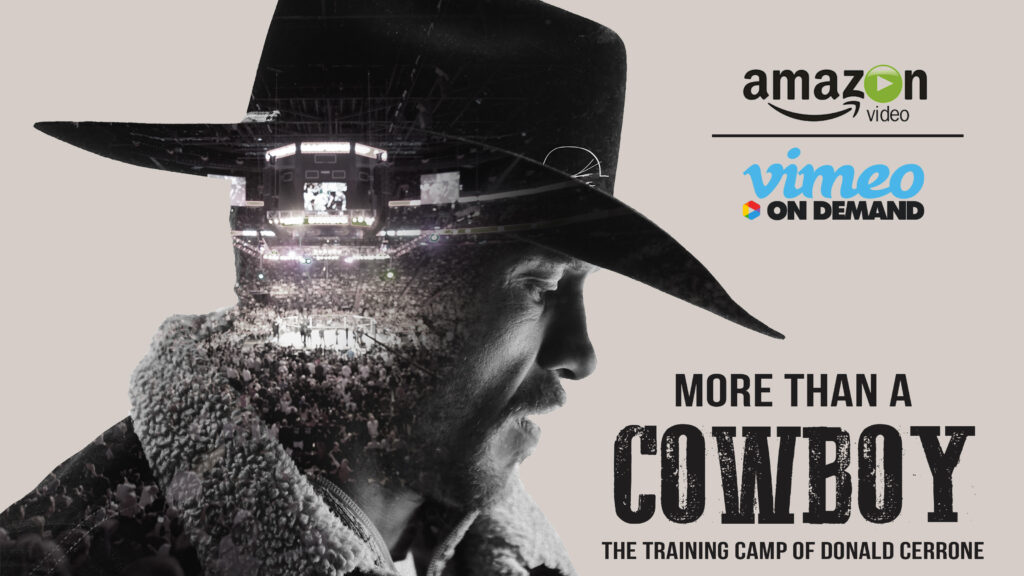 When Donald “Cowboy” Cerrone signed with UFC in 2011, he won the World MMA Award for Breakthrough Fighter of the Year. Now known as one of the UFC’s top fighters, Cerrone prepares for the biggest fight of his career against fellow UFC superstar, Conor McGregor at UFC 246 on January 18th. More Than a Cowboy: The Training Camp of Donald Cerrone is a mini-docuseries that follows Cerrone as he goes through the gritty and gut-wrenching process of preparing for a fight in the cage.

Directed by James Lloyd McKinney, More Than a Cowboy explores Cerrone’s seventeen-year history as a fighter. The series features interviews with Cerrone, his coaches and his family, and provides an inside look into his unorthodox training methods.

“MMA is a world that, despite its popularity, still has so much unknown around it.” said director McKinney. “When it comes to the lives of these athletes and the preparation it takes to actually lock yourself in a cage with another human being and say, ‘alright we’re going to fight,’ there’s a
lot we as fans haven’t seen that we are hungry for. More Than A Cowboy is our chance to dive into that world outside of the octagon and see that preparation at the highest level with not just a UFC fighter, but one of the best fighters of all time.”

After two wins and two losses in 2019, Cerrone is looking to change the odds in the most anticipated fight of 2020. But head coach, Jafari Vanier, is confident in Cerrone’s ability to dominate the octagon. “If I look at the two, he’s got a lot more to worry about than we do,” says Vanier. “We’ve got multiple submission victories, head kick knockout victories…we just have to
worry about a left hand and that first round.”

Episodes of More Than a Cowboy are currently streaming on Amazon Prime and Vimeo. Further episodes will be released each week, leading up to the unprecedented fight between Cowboy Cerrone and Conor McGregor on January 18, 2020. 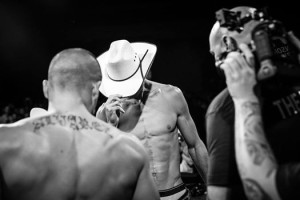 The only thing Donald Cerrone is more known for than being an adrenaline junkie and willing to fight anyone anywhere is his ability to take losing with class. Saturday was no exception.

Cerrone posted on Instagram about his first-round TKO loss to Darren Till at UFC Gdansk and was complimentary of the English fighter’s performance. The photo “Cowboy” chose was an action shot of him getting smashed in the face by Till during the fight. 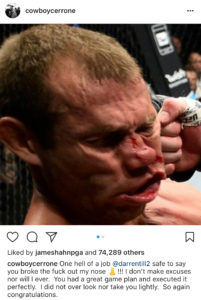 “I don’t make excuses nor will I ever,” Cerrone wrote. “You had a great game plan and executed it perfectly. I did not over look nor take you lightly. So again congratulations.”

Till blasted Cerrone with big left hands in the first round. Toward the end of the round, one of those rocked him and Till followed up with a vicious standing elbow and then a flurry of punches with Cerrone in a turtle position. It was by far the most significant win of Till’s career.

Cerrone (32-10, 1 NC) has now lost three straight. He was coming off a close decision defeat against Robbie Lawler at UFC 214 in July. Cerrone, 34, is a notorious slow starter and Saturday seemed like another case of that.

Till (16-0-1) has never lost in his MMA career and sports a very nice 5-0-1 record in his UFC tenure, which dates back to 2015. Till is just 24 years old and seems like a top prospect in the welterweight division.

To view this article as it appears on MMAFighting.com, click here.

TILL SHOCKS ‘COWBOY’ CERRONE WITH STUNNING FIRST ROUND TKO

The upstart welterweight contender promised a jaw-dropping performance after the UFC finally gave him a top 10 opponent in Donald “Cowboy” Cerrone and that’s exactly what he delivered.

With an undefeated record, Till was definitely a prospect on the rise in the UFC’s welterweight division, but he hadn’t faced anyone with the kind of veteran experience that Cerrone had going into Saturday’s main event. Cerrone is one of the winningest fighters in UFC history.

All week long, Till had guaranteed that he was going to shock the world and it didn’t take him long to prove that he belongs among the elite welterweights in one of the UFC’s toughest divisions.

Till showed a ton of confidence early as he stalked Cerrone across the Octagon, looking to use his size and reach advantage with a series of hard, straight punches. Till connected with a solid left hand several times while walking down Cerrone.

Cerrone countered with a couple of takedown attempts, which was a much different strategy than anyone probably expected going into the main event.

It was clear that Cerrone was struggling a bit with Till’s reach as he continuously ate left hands from the British fighter, who looked at least a weight class bigger once they stood next to each other inside the Octagon.

Till’s relentless pressure didn’t slow down until he connected with a vicious left-right combination that had Cerrone on wobbly legs as he backed up towards the cage.

Knowing that Cerrone was hurt, Till turned up the pressure by throwing a barrage of punches in rapid fire succession until he dropped the former UFC title contender down to the mat.

The flurry didn’t stop until referee Marc Goddard saw enough and swooped into stop the fight at 4:20 into the opening round as Till picks up the signature victory he promised.

Afterwards, Till paid tribute to Cerrone for stepping up to accept the fight against him when he knew there was nothing to gain by facing an unranked opponent going into the main event in Poland. From there, Till immediately turned his attention to another welterweight challenger, who just so happened to be sitting cage side for the event.

To view the full article as it appears on MMAWeekly.com, click here.

GDANSK, Poland – Donald Cerrone knows he has a lot more to lose than gain in his UFC Fight Night 118 headliner with Darren Till, but he doesn’t seem to care.

An established fan-favorite like Cerrone (32-9 MMA, 19-6 UFC) agreeing to fight an unheralded opponent like Till (15-0-1 MMA, 3-0-1 UFC) is an increasingly rare occurrence in the modern UFC. Top fighters are largely concerned about facing someone who has a ranking next to their name; they aren’t as willing to take the risk of fighting lesser-known opposition compared to when official rankings didn’t exist in the sport.

Cerrone, who meets Till in Saturday’s welterweight main event on the UFC Fight Pass-streamed card at Ergo Arena in Gdansk, Poland, isn’t one to fret over such things. His enjoyment of the sport trumps the politics of enhancing or weakening his position in the division, and he said that’s for the best, because fighters who dwell on their place in the rankings don’t appear much better off.

“The rankings don’t matter,” Cerrone told MMAjunkie. “I feel like in the last year the rankings don’t (expletive) matter anyway, right? ‘Cowboy’ takes a fight with somebody (unranked), and they’re like, ‘What the (expletive)?’ But someone who has the title can fight anybody they want, and it’s like, ‘Ah, that’s just a good fight.’ Come on, man. It seems like the last year the rankings aren’t mattering. I just needed an opponent.”

The UFC returns to Poland for the second time on Saturday with UFC Fight Night 118, which takes place Ergo Arena in Gdansk and streams on UFC Fight Pass.

The event is headlined by a key welterweight bout. Donald Cerrone(32-9 MMA, 19-6 UFC) adds yet another octagon trip to his resume when he takes on unbeaten rising prospect Darren Till (15-0-1 MMA, 3-0-1 UFC) in a clash of old guard vs. new guard.

Several other notable names fill the 12-fight lineup. For more on the numbers behind the matchups, check below for 55 pre-event facts about UFC Fight Night 118.

Cerrone enters the event on the first losing skid of his career.

Cerrone fights outside of the United States or Canada for the first time since June 2007.

Cerrone makes his 36th UFC/WEC appearance, the most in the combined history of the two organizations.

Cerrone’s 36 appearances in UFC/WEC/PRIDE/Strikeforce competition are third most in combined organizational history behind Wanderlei Silva (40) and Dan Henderson (40).

Cerrone’s 15 appearances since 2014 in UFC competition are most in the company.

Cerrone’s 19 victories in UFC competition are tied with Georges St-Pierre and Demian Maia for second most in company history behind Michael Bisping (20).

Cerrone’s 25 victories in UFC/WEC/PRIDE/Strikeforce competition are tied with Henderson for the second most in combined organizational history behind W. Silva (27).

Cerrone is 4-2 since he moved up to the UFC welterweight division in February 2015.

Cerrone has earned all four of his UFC welterweight victories by stoppage.

Cerrone’s 13 stoppage victories in UFC competition are tied for third most in company history behind Vitor Belfort (14) and Anderson Silva (14).

Cerrone’s 17 stoppage victories in UFC/WEC competition are the most in combined organizational history.

Cerrone’s 17 stoppage victories in UFC/WEC/PRIDE/Strikeforce competition are tied for third most in combined organizational history behind Mirko Filipovic (21) and W. Silva (20).

Cerrone’s six knockout victories stemming from a head kick in UFC competition are the most in company history. No one else has more than four.

Cerrone’s 14 knockdowns landed in UFC competition are tied with Chuck Liddell for third most in company history behind A. Silva (18) and Jeremy Stephens (16).

Cerrone’s 13 fight-night bonuses in UFC bouts are tied with A. Silva for third most in company history behind Nate Diaz (15) and Joe Lauzon (15).

GDANSK, Poland – Donald Cerrone relishes the narrative his UFC Fight Night 118 headliner with Darren Till could be a changing of the guard in the UFC welterweight division.

Cerrone (32-9 MMA, 19-6 UFC), who meets Till (15-0-1 MMA, 3-0-1 UFC) in the main event of Saturday’s UFC Fight Pass-streamed card at Ergo Arena in Gdansk, Poland, is aware of all the storylines. From the perception that an up-and-comer will make a name at his expense to the fact “Cowboy” could be falling off by fighting someone outside the rankings after back-to-back losses, Cerrone has heard all the chatter.

Anyone who’s followed Cerrone’s career knows there’s almost nothing he won’t take it stride. So, the “old school vs. new school” outlook on the matchmaking certainly isn’t going to come as a bother for arguably the most laid back fighter in the sport. Cerrone said Till deserves all the credit if he successfully uses his name as a building block, but he just doesn’t see it happening.

Donald Cerrone vs. Darren Till slated to headline UFC Gdansk

Darren Till asked for a big fight next, and he got one.

The undefeated welterweight is set to take on Donald Cerrone in the main event of UFC Gdansk in Poland on Oct. 21, multiple sources told MMA Fighting. MMA Uno first reported the match-up.

Till (15-0-1) recently defeated Bojan Velickovic via unanimous decision at UFC Rotterdam, improving to 3-0-1 inside the Octagon. Till will compete in his fifth different country since signing with the UFC.

Cerrone (32-9, 1 no-contest), on the other hand, looks to get back on track after consecutive losses to Jorge Masvidal and Robbie Lawler snapped a four-fight winning streak. “Cowboy” is 4-2 since moving up to the welterweight division.

To view the full article as it appears on MMAFighting.com, click here.